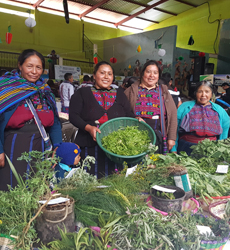 Guatemala is known for its high agro-biodiversity. It is the center of origin of crops that are important to food security. SD=HS works with the Mayan population of the area. They are mainly responsible for preserving the agro-biodiversity that forms the genetic basis that is crucial for climate change adaption.

The predominant produce of the area are vegetables, potatoes, coffee, and corn. Over 90% of corn production is with local varieties under the management of small producers with an average of a quarter of a hectare per family. Agricultural statistics in recent years show ups and downs in harvests, mainly due to problems related to climate, excess or lack of rainfall and the incidence of pests and associated diseases. SD=HS works in the Sierra de los Cuchumatanes in the North of Guatemala, in the district of Huehuetenang, where more than 80% of its population lives in indigenous Mayan towns, Mam, Chuj, Kanjobal, Akateco, Aguacateco, Poptí and Quichéyde. In these towns, 60% of the inhabitants are illiterate and 77% of children under five suffer from malnutrition.

In Guatemala, local seed systems are not yet recognized, although they support rural and indigenous families. 99% of farmers have maintained their own seeds for generations. There are currently several proposals to regulate access to seeds, but there is no multi-sector consensus. One of the challenges of SD=HS is to generate consensus on seed policy and to advocate for the Agricultural Extension System in Guatemala to help smallholder organizations more effectively.