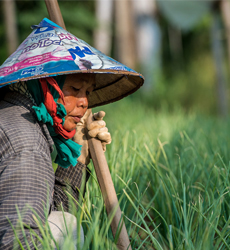 In Lao P.D.R., Oxfam Novib works together with SEARICE and its local partner Agricultural Research Center (ARC) (national coordinator), Department of Agriculture, the Provincial Agriculture and Forestry Office (PAFO) and District Agriculture and Forestry Office (DAFO), and Oxfam in Lao P.D.R.  SD=HS works on Pillar 1, reaching out to indigenous people and smallholder farmers of five provinces, namely: Oudomxay and Xayaboury in the Northern region of Laos, Saravanh and Attapeu from the South and Vientiane province in the Central region.

Farmers cooperating with research institutions
In Lao P.D.R. breeding and pre-breeding activities with partner research institutions contributed to indigenous peoples’ and smallholder farmers’ own innovative adaptation strategies, because they allow sustained access to farmers to Plant Genetic Resources for future variety selection, enhancement, and breeding. This is crucial for farmers to continuously adapt to changing climates.

Policy engagement
A regional workshop on the implementation of seed laws was organized in Hanoi. Both farmers from Vietnam and Lao P.D.R. attended. Through such events, local awareness of seed policies and the impact of these policies on local seed systems is increased. The capacity of communities to engage in and influence agricultural and climate change policies at local to global levels by articulating their challenges and needs is important for the independence of farmers.

Country-specific field guide
The SD=HS program is working on a country-specific field guide for Lao P.D.R., based on results of the baseline survey and the existing field guides that were initially (jointly) developed by partners and farmers. It has been noted that appropriate methods and tools to incorporate traditional knowledge and local cultures and beliefs are needed. This may involve the use of local languages and visual aids (symbols).